You are here: Home » News » Issues faced by Citizens Advice Newcastle clients during the Covid-19 epidemic.

Citizens Advice Newcastle is unique, in that we can provide a real-time insight into the issues people are facing as the epidemic and the policies stances taken as a response to the crisis continue to evolve. Below, we highlight the changing nature of the issues people were seeking advice from us about between the 1st March 2020 to the 16th April 2020 (using fortnightly snapshots), the types of issues we are seeing and areas that require further clarifications to provide security for residents.

Until the middle of March, the volumes and types of cases and advice that people sought from us matched normal expectations. However, in the second two weeks of March (16th to 31st March) we had seen significant shifts in the issues that people had been seeking advice on, as the chart below shows. In the first two weeks of April (1st April to 16th April), we have seen this trend intensify, with an even higher percentage of people contacting us requiring benefit or employment advice whilst queries to our other areas of advice continue to fall.

We expect that residents are still experiencing issues with other areas of advice (debt, energy, housing, consumer, family matters etc), but are either putting these issues to one side for the time being or still trying to sort out there immediate financial security (through employment or benefit claim) before addressing secondary issues. 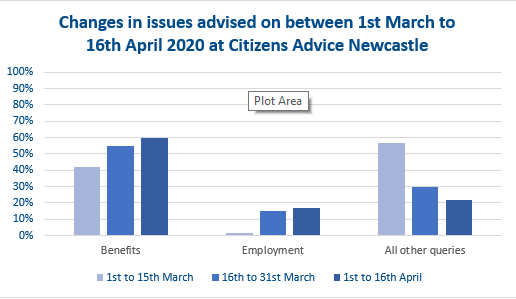 Whilst we have seen a significant decrease in people seeking advice about most areas of advice (debt, energy, housing, consumer or family matters etc), we are continuing to see an increase in two areas, benefits and employment.

As a service, we are concerned that there are still many employed people falling through the gaps in provision announced by the government. This graphic shows those who are still at risk.

Based on our findings, Citizens Advice Newcastle recommends that the following changes still need to be made…

Beyond gaps in the existing system, one potential challenge on the horizon is employers making workers redundant and choosing not to put them on the scheme. The government may want to evaluate further contingencies, should the number of workers in this group be significant. We have identified two main contingency routes: